2017.06.19 The Diplomat: Ahead of Presidential Election, Mongolia Corruption Scandal Has a New Twist 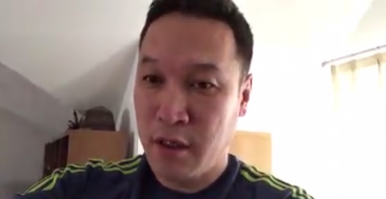 A Facebook live video from a whistleblower resurrects a previous bribery scandal.
By Bolor Lkhaajav   June 19, 2017

On June 26, Mongolia’s presidential election will take place. It is set to be a controversial one, marked already by corruption, scandal, media censorship, and insurmountable distrust among the constituencies.

On May 9, 2017 an audio recording was released to the public. It appeared to be a recording of a 90-minute conversation between the chairman of the Parliament, M. Enkhbold, who is running for president as the candidate of the ruling Mongolian People’s Party (MPP); the chairman of the Office of People’s Committee, Ts. Sandui; and A. Ganbaatar. This audio, allegedly recorded in 2014, preceded Mongolia’s parliamentary elections of June 2016. The recording became famous for discussion of the MPP’s “60 billion tugrik” ($25 million) deal to take bribes to shuffle government positions as part of a plan to empower its party grip.

The audio was quickly spread around social media and reached millions of people. To critics, the conversation was shocking evidence of high-level corruption and bribery. However, the Mongolian justice department and law enforcement have ruled that this recording is fake and that the voices of the three gentlemen in question were replicated. Despite the law enforcement’s conclusion, Mongolian people at home and abroad are highly suspicious, arguing that if MPP did make a $25 million deal to bolster its power, the legal apparatus may be corrupted as well. Other experts in the production field stated that creating 90 minutes of back-and-forth conversation with artificially replicated voices is almost impossible.

More interestingly, Sandui, one of the men allegedly speaking in the recording, flip-flopped on his statements a number of times, rousing yet more suspicion.

On June 15, Mr. Dorjzodov, the whistleblower who released the tapes, went live on his Facebook account to insist on the authenticity of the recordings. In his video, he stated:

“Since the police force has surrounded my building, I could be arrested at any given point, so I’ll speak very quick to reinstate what I have already released to the public. On September 8, 2014, a 60 billion tugrik meeting took place involving M. Enkhbold, Ts. Sandui, and A. Ganbaatar, and myself as a protocol recorder. During the 90-minute meeting, there was a 60 billion tugrik deal to sell government positions at all levels. I have five or six pieces of photographical evidence secured elsewhere and will release them to you soon.”

In a brief face-to-face question session from the journalists who were able to get in touch with him via Facebook Live, Dorjzodov added that ever since releasing the audio tape, he has had his life threatened and also been offered bribes of 1 million tugrik from Enkhbold, Sandui, and Ganbaatar During the investigation, a police lieutenant reportedly told Dorjzodov that “if the chief tells me to get rid of you, we will execute the order.”

Dorjzodov also denied all the police press releases that had been posted on his Twitter account and said that he did not request any protection from the MPP or the police. Their pursuit was to make an arrest, not provide police protection, he said.

In recent years, Mongolia’s high politics, corruption, and bribery cases have dampened many people’s trust in the government and the law enforcement. The whistleblower’s statement, along with the recording, created a shock wave in Mongolian society, with many people seeing it as a wake-up call, especially during a crucial time ahead of a presidential election.

Strangely enough, on June 13, 2017, Enkhbold extended the spring parliamentary session until further notice without providing an explanation. The timing, uncomfortably close to the pursuit of Dorjzodov, added to popular anger over the MPP’s use of its power. One week before Mongolia heads to the polls, the atmosphere is almost at a boiling point.

Bolor Lkhaajav is pursuing an M.A. in Asia-Pacific Studies at the University of San Francisco. She was formerly a Security Analyst with Horizon Intelligence.